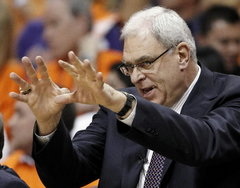 Phil Jackson is a retired NBA player and NBA coach. The biggest impact that he had in the National Basketball Association (NBA) was as a Head Coach for both the Chicago Bulls and the Los Angeles Lakers. In his coaching career he would be given two of the toughest test which were to coach two of the NBA’s Greatest stars: Michael Jordan of the Chicago Bulls and Kobe Bryant of the Los Angeles Lakers. His belief in both American Indian and Zen Buddhism were a big part of his coaching methods. He used meditation to help his players become more under control through crucial moments in basketball games. While coaching in the National Basketball Association he was known as the Zen Master for being very spiritual and using his belief to coach. He encouraged his team use “complete selflessness”, when they played the game of basketball, which also is the philosophy of John Wooden, “ The Star of the team, IS the team” and the “we before, me mindset”. Unlike other coaches, Phil Jackson was calm, quiet, and relaxed while on the bench. This made the teams he coached calm during difficult times in games. The style of coaching he used was known as the “Triangle Offense”,  in which everyone would be a part of the game; not just any individual player. The stars like Michael Jordan and Kobe Bryant would have to put their own skill aside and dominate as a team instead of individually. This type of coaching wouldn’t be questioned because Phil Jackson led his teams to 11 NBA tiltes 1989-1998 (Chicago Bulls) and 1999-2004 and 2005-2011 ( Los Angeles Lakers). Although there was  some difficult seasons with the Los Angeles Lakers, Phil Jackson believed in his team to thrive and work together; to win. He would be considered the Greatest NBA Head Coach in the history of the NBA. Some quotes that inspired his players and showed that in order to achieve something you must work together: ’The sign of a great player was not how much HE scored, but how much he lifted his teammates’ performance’, said by a mentor of Phil Jackson that he encouraged Michael Jordan to listen to.