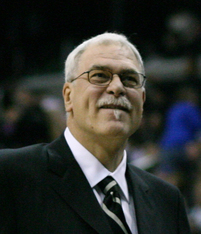 Phil Jackson believed strongly in teamwork. His employment of the triangle offense showed his thoughts about how a team should work together, having no one ‘glorified’ at the expense of the rest.Jackson emphasized that a team centered into each other would become very successful. Phil Jackson used the power of role playing in his practices. It is said that in a practice against an important opponent, Jackson had one of his players of a similar build to dress exactly like his opponent so that his players could visualize beating and overcoming him in practice. His set of plays allows freedom of movement towards every play. “Once you’ve done the mental work, there comes a point you have to throw yourself into the action and put your heart on the line. That means not only being brave, but being compassionate towards yourself, your teammates and your opponents.” This quote of his states that all competition should treat each other equally as if there was only one goal: donations. “Always keep an open mind and a compassionate heart.” This quote tells the people that trying and going for the goal and never stopping is better than trying, fail, then quit because you never know what the future holds in front of you. His strategy towards life inspires people to live smart while risking what you got and believe that your business will thrive. His teachings inspired the Lakers to become as successful as they are now.